The History of Water Power on the Taccoa/Ocoee River 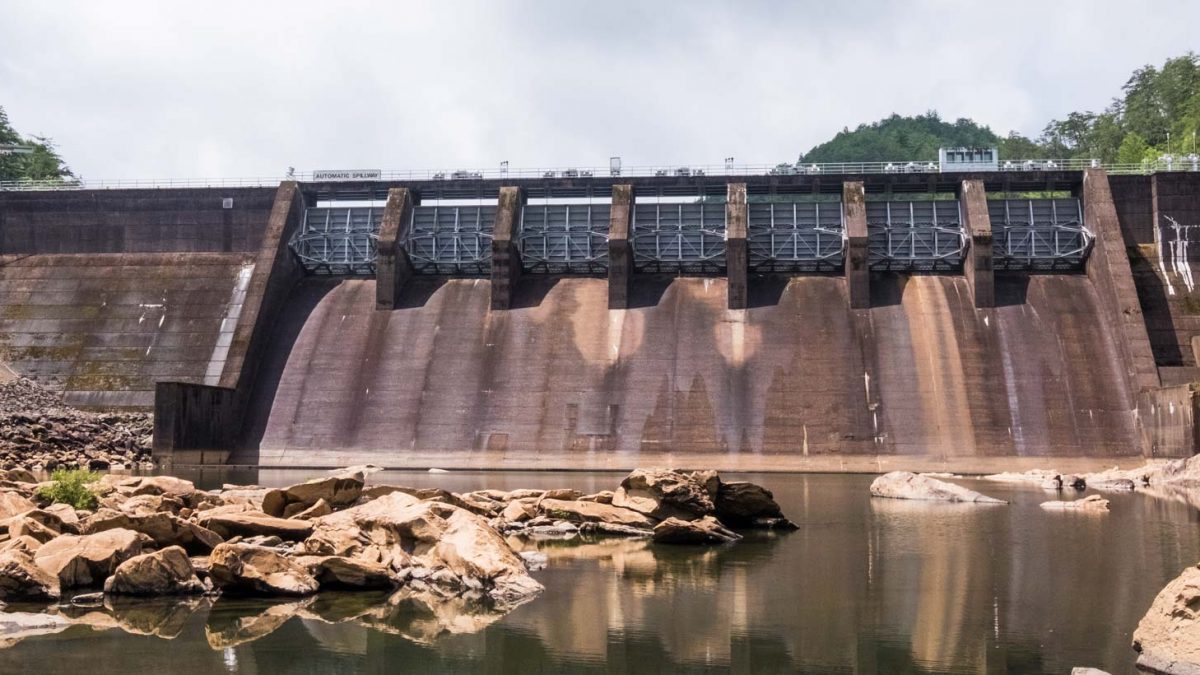 History of Power Generation History on the Taccoa/Ocoee River

With the passage of the TVA Act in 1933, the Tennessee Valley Authority was given oversight of the Tennessee River watershed. Which included the Toccoa/Ocoee River. TEPCO challenged the constitutionality of the TVA Act in federal court, but the U.S. Supreme Court upheld the law in 1939, and TEPCO was forced to sell its assets to TVA for $78 million in August of that year. TVA then swiftly began construction on Ocoee #3.

History of Ocoee #1 Dam and Powerhouse

Ocoee Dam number one was the first hydroelectric dam built in the state of Tennessee and one of the first in the country. Construction began in 1910 and in January 1912 the plant began generating electrical power. Household electricity was first introduced in 1905 so Ocoee number one was built to satisfy the earliest initial demand for home electricity. The location chosen was just to the east of the more mountainous region currently known as the Cherokee National Forest.

The Dam construction took 18 months and the cost to build was less than three million dollars. A unique facet of the project is that a small town was actually built to house the workers and dam builders. 1500 workers and their families lived in the town which featured its own waterworks department, fire and police, several stores and a hospital. Foundations of many of the town’s buildings still exist. This was 21 years before TVA was formed by the TVA act by Congress.

Ocoee Dam Number Two was completed in 2013 just one year after Dam number one was completed. Dam Number two has unique construction. It is a relatively low dam, only 30 feet in height and originally was a timber structure filled with rock and boulders. Much later in the 1980s this structure was covered in layers of concrete. a generating capacity of 23,100 kilowatts.

On the river left side of dam is a gate and a wooden flume. The water from the small lake above Ocoee number two enters the flume through the gate. The flume is five miles long and loses less than 19 feet in elevation during those five miles. At the end of the flume the water drops 250 feet through two large metal pipes to generators. The Powerhouse is located just below the last rapid of the Middle Ocoee.

This innovative design generated far more power than if the powerhouse were located at the dam site. 250 feet vs 30 feet generates a lot more pressure at the turbines. Workers lived in a mill town about one mile downstream of the powerhouse. You can still see the railroad bed than transported men and materials from the town on river left. Materials were transported across Parksville Lake to docks near the town. As silt caused by copper mining upstream filled the lake new docks had to be built downstream.

Blue Ridge Dam was built by the Toccoa Electric Power Company, a subsidiary of the Tennessee Electric Power Company. Blue Ridge Dam is a hydraulic earth-fill type dam 167 feet high and 1,000 feet long. Construction began in 1925 and was complete in 1931. At the time of its completion, the dam had a generating capacity of 20 megawatts and was the most modern power dam in the TEPCO system, requiring a staff of just six employees. Subsequent upgrades have increased the dams generating capacity to 22 megawatts.

TVA acquired Ocoee #1 and #2 in August of 1939 after a long lawsuit that reached the US Supreme Court. Construction of Ocoee #3 began almost immediately. In addition to producing more need power for the war effort of WWII it also helped protect Ocoee #2 and #1 from silting occurring upstream. TVA additional began closing the mill town below Ocoee #2.

Ocoee Dam Number Three has a construction that differs from the first two dams. The dam is five miles upstream of Ocoee Dam number two. The concrete dam is 110 feet high. However rather than locate the powerhouse at the base of the dam it was place downstream near present day Thunder Rock campground. A 2.5 mile tunnel was drilled through the mountain to reach the powerhouse 4.2 miles downstream.

This diversion-type dam allowed the engineers to create even more power by utilizing the elevation drop of the river. At the end of the tunnel water drops 180 feet though a large pipe to the turbines in Ocoee #3 Powerhouse. The dam and the river in this upper stretch are located in a valley between Big Frog mountain to the south and Little Frog mountain to the north. 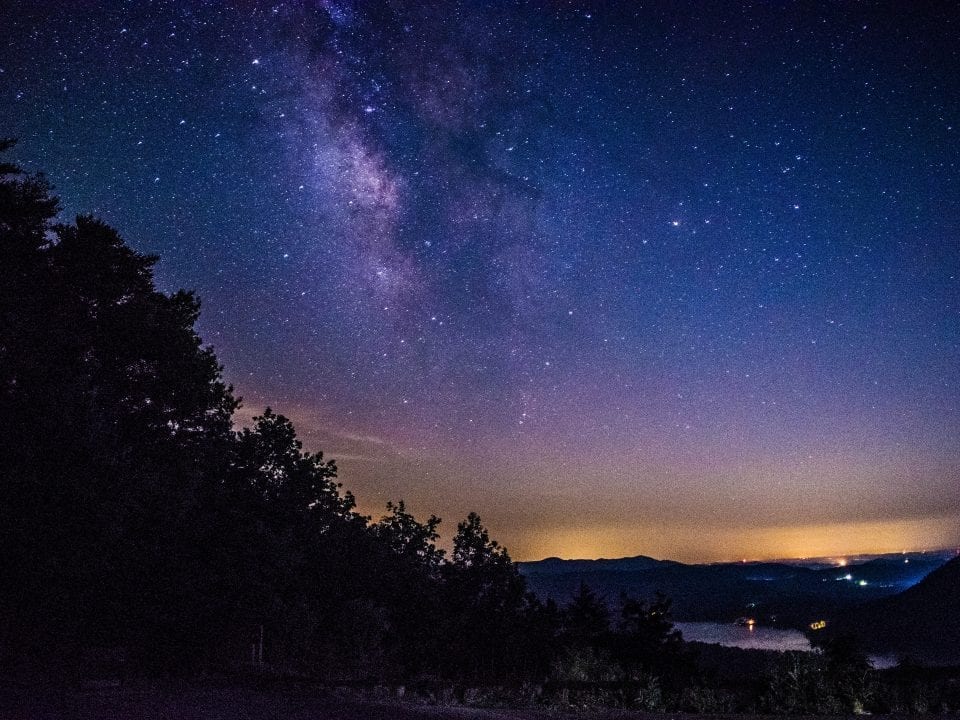 The Milky Way from Chilhowee Mountain. 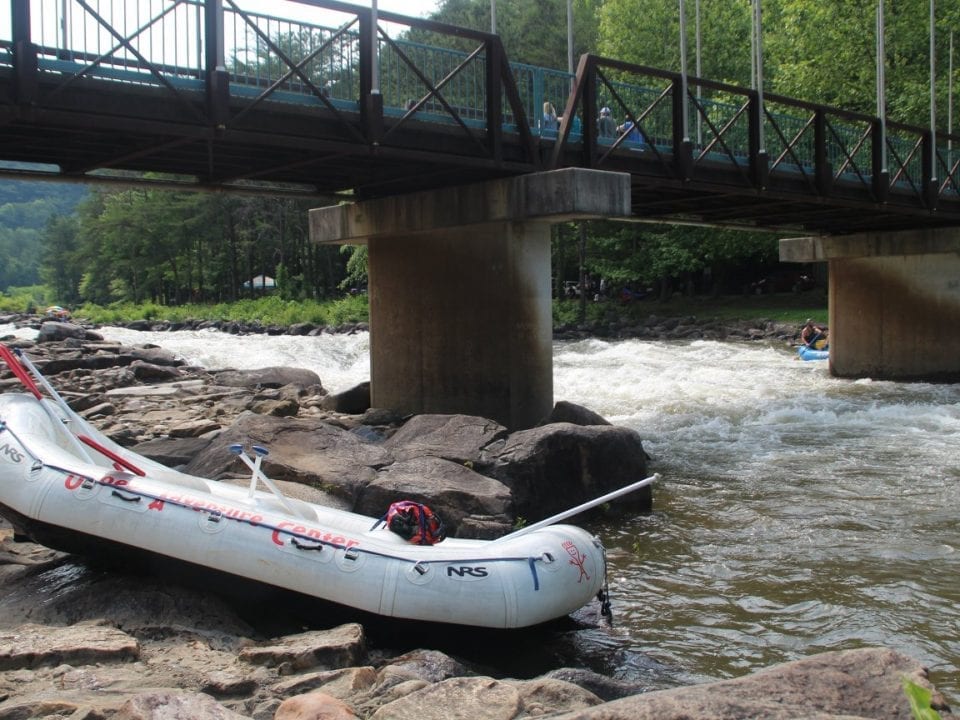