Real Ice Cream Made from Fruit and Glacier Ice 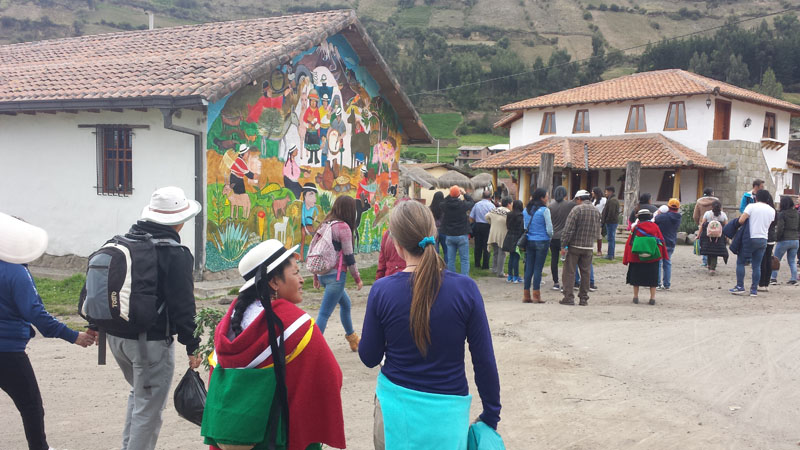 Third blog of the series in Ecuador takes us to Riobama to check out Tren Ecuador. I wrote this blog from my apartment bedroom with a panoramic view of Tungurahua volcano and the surrounding mountains with the city of Baños de Agua Santa below.

What river guides do in the winter

This day began clear and sunny but has become windy with smoke in the air. Most full time Ocoee River guides find winter gigs. Some work the ski slopes and others head south to Latin America. Taking a winter break from my full time job rafting after a great season. Avoiding winter in Ecuador with Baños de Agua Santa as the center of my operations. There is much to be enjoyed the weather, the lower cost of living, and friendly people. 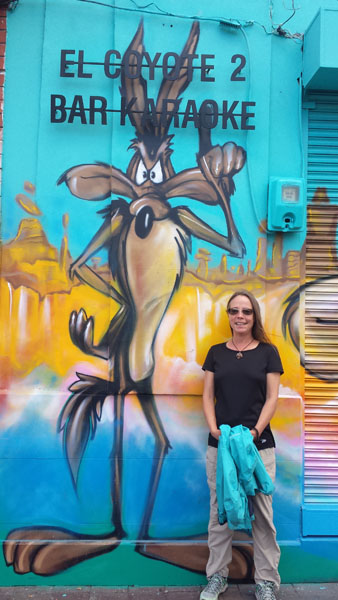 This week’s adventures are loosely connected to the Tren Ecuador “Tren del Hielo” excursion. We chose to catch our train from Riobama rather than Ambato. This allowed us to see another new city and visit a friend we met at Lisan Wasi comunidad.

Holly and I began the adventure with a walk to the Baños bus station where we bought tickets to Riobama for $2 each. We arrived at about noon and waited less than fifteen minutes for our bus. The bus ride was uneventful with just one vendor selling “natural” pills to improve digestive and sexual health. These sales people get on the bus through towns and seem to sell almost anything like the old Ronco ads on TV. Between the onboard entertainment and the wonderful landscape views of tall volcanoes you never get bored.

Arriving at Riobama we found a room for $26 at Hotel Caracas Suites and stashed our packs before exploring the city and finding the Tren Ecuador station about one mile away. Elections were being held Sunday so all alcohol sales were suspended Friday through Sunday. The walk to Tren Ecuador was pretty easy just following Avenida Daniel Leon Borja for roughly one mile. The Tren del Hielo usually runs Saturdays and Sundays but would not run on Sunday this week due to the elections. We purchased two tickets for Saturday’s train for $28 apiece.

Afterwards we walked back up Avenida Daniel Leon Borja looking for something to eat. Many of the restaurants were closed due to the upcoming election. Voting is compulsory in Ecuador. Many must travel to vote so some businesses close. Others like bars may close due to the loss of alcohol sales. We found the Argentinia Parrilla “El Charo” and had a couple of chicken sandwiches. After dinner we crossed the street to try coffee at Cafe Maya. Nelly saw us crossing the street. Nelly then joined us at Cafe Maya. Over coffee we decided to meet up after the train excursion the following day. 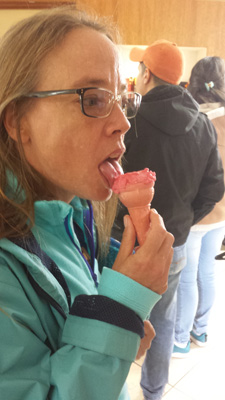 We awoke early Saturday morning to walk to the train station and the Tren Ecuador Cafe. We had to be at the station by 7:30 am. To our collective disappointment the cafe was not open. A quick walk yielded no other options but a lady near the station gave Holly directions to a nearby bakery. The bakery was great; the coffee was good as were the baked offerings.

We returned to the station just a few blocks away and waited briefly for the train. Holly used the extra time to buy a hat to keep warm. We boarded the train and departed at 0800 sharp. See video for actual footage of the train. The armed security that escorted the train on motorcycles and posted at road crossing was interesting to watch.

The scenery was stunning. Volcanoes were visible at times while hiding behind clouds at other times. Our first stop was Urbina where we met the last ice gatherer but first we were invited into the small train station by a fireplace for a sweetened milk beverage with barley and a queso empanada. Our brunch was delicious. While we ate we also enjoyed a short video about Baltazar Ushca who braves low temperatures and high altitude to harvest ice from Taita Chimborazo.

The movie was subtitled in English. After eating we explored outside and looked at Chimborazo off in the distance. Soon we were ushered inside another building to meet Baltazar and try some ice cream made from his ice and blackberry juice. The ice cream was great as you can see in this photo of Holly enjoying her cone. Holly also bought another nice blue hat and scarf made from alpaca wool. Before re-boarding the train we took some photos of the llamas and landscape. 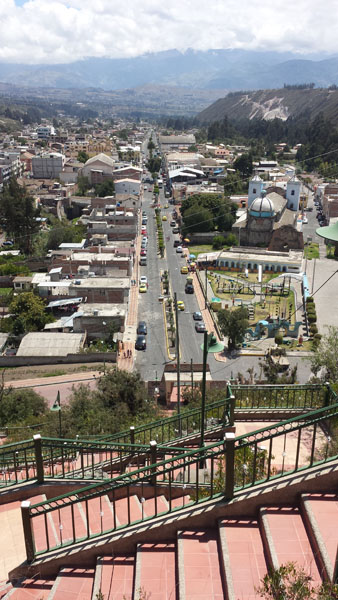 The train ride back toward Riobama and our tour guide’s oratory reminded me of the riding in the raft buses during the Ocoee River rafting season with mountains in the background.

We stopped at La Moya on the paramo. The high treeless platueau above the treeline but below the permanent snowline in tropical South America is known as paramo. We were immediately greeted with music and dancing at the train; see associated video for music and dancing. The dancers had bright outfits with fine embroidery. Following the dancing we were invited into a small hall for a drink.

First we were all given a hot cider like drink with an option to top it off with the local spirit made from sugarcane that reminded me of moonshine; the combination was quite warming. Then a short video about their community was played on a flatscreen.

There were some technical difficulties as a small nina inadvertently unplugged the television a couple of times before being moved by her family. This provided some comic relief. Afterwards we began a walk to the village. At this altitude I could notice the reduce levels of oxygen in spite of a couple of months of living above 6,000 feet in altitude. The walk to the village was about a mile with a few stops along the way. Members of the community escorting us taught us about some of the plants they grew and used for various purposes. We saw alpacas and other animals along our way.

Arriving in the village we saw beautiful murals painted on the church and other buildings as well as a colorful patchwork of farm plots on the rising mountains that bordered the community. The inhabitants of La Moya are the descendants of the ancient Puruha people. They once harvested ice from Chimborazo before competing ice machines provided cheaper ice. In addition to the church they have a small museum filled with interesting exhibits. We milled about and mixed with the locals until it was time for lunch; Holly shot a short video of one elder playing a horn while an older lady spun wool; see video. 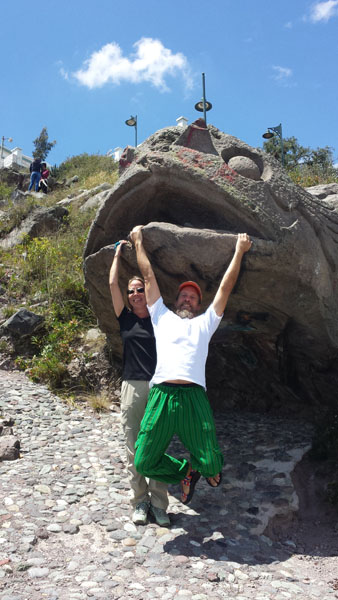 Lunch began with sopa de quinoa a tasty soup of grains with a small piece of meat. The main course was roasted chicken with local corn and rice. A spicy salsa was provided to add heat. The chicken and spices were very good together. Desert was a fig and cheese with a syurp and was quite sweet and tasty. Lunch was interesting as most of the folks in my group were Ecuadorian and they were the source of much information.

Following lunch Holly inquired about lodging at La Moya. We were shown some nice rooms available for $15 per person. They also provide workshops to those interested for about $5. The walk back to the train seemed easier and quicker; it may have been downhill just a bit. I met a family from Ohio who had previously rafted the Ocoee River. We chatted and they asked me about Baños as they were headed there next. I gave James and his family some information about things to do and sights to see.

The train ride back to Riobama

The train ride back to Riobama from La Moya was quick as we were only twelve kilometers or roughly seven and a half miles away from the station.

When we arrived back at our hotel found that the internet was down. We were rather tired as well so after a brief rest we walked to a cafe for coffee and a quick bite.

However along the way we visited Parque Guayaquil a rather large park. There was a water park and rides for the kids. We also found some really cool sculptures and works of art. The bandstand was colorfully painted with Boy Scouts milling about. Afterwards we made it to the cafe and used their wifi to message Nelly. Nelly met us at the Hotel later and took us to her family’s home on the outskirts of Riobama. They had a beautiful horse and raised quail for egg production; see slide show for photos.

Sunday morning/election day we had a great Ecuadorian breakfast with Nelly’s family. The potato cakes were orange and very tasty. Pork and corn were also included. The tomato tree juice was tasty and about the color of orange juice. After relaxing and exploring the farm we took a trip to a nearby town of Guano. We climb a hill overlooking Guano.

On the hill we saw sculptures that had been hand-carved in 1924 by the Riobambeno artisan Luis Felipe Reinoso on the design of Dr. Cesar Leon Hidalgo; photos are available in the slide show below. There many interesting plants growing along the switchbacks to the top of the hill. We could also see old ruins next to the church below. We took lots of pictures of the artwork and landscapes; see slide show. 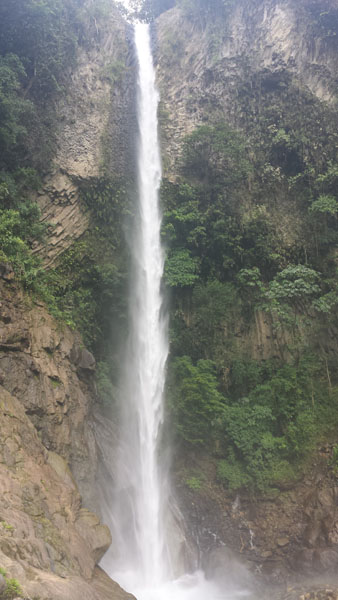 After visiting Guano we went back to Riobama where Nelly voted. Election day felt like a fiesta on the streets surrounding the polling site. Vendors were cooking and offering various kinds of food for sale. The vote was upon seven resolutions intended to curb corruption and unite Ecuadorians. All seven referendums passed including term limits by large margins. Citizens are required to vote and are fined $60 if they don’t; the average Ecuadorian income is just $425 per month.

There were many people voting but the process was efficient and quick. Afterwards we returned to Nelly’s grandma’s house and enjoyed a real Ecuadorian lunch with plenty of grains and starch.

Nelly gave us a ride back to Baños via the old road. A new road was built due to volcanic eruptions of 2002. The ride was much more adventurous than our rafting bus rides through the ocoee River Gorge. Holly got quite excited about several narrow passages. The two big ash flows were particularly tricky to pass safely. We stopped and took pictures and even did some hiking in the largest boulder-strewn ash flow.

On Monday Nelly showed us a couple of waterfalls off the beaten path not far from Baños. The first was accessed through a trout farm. This small waterfall had a nice grotto that required wading or rock climbing to enter. We spent quite a bit of time in the shade enjoying the mist of the waterfall; with a couple pools deep enough for swimming. I also hiked down to the Pastaza River about 100 meters from the waterfall.

The second waterfall was part of an indigenous community but only cost $1 to visit. This waterfall was quite tall. The path was fairly long and quite steep but had stairs, ladders, and handrails for safety and better access. There was a 100 foot suspension bridge near the base of the waterfall. You can see photos of the falls and more in the slide show below.

This was a wonderful experience but I am looking forward to rafting this summer on the Ocoee River. The first Ocoee River releases of the season are not far away! It is not too soon to reserve your rafting trip spots now. 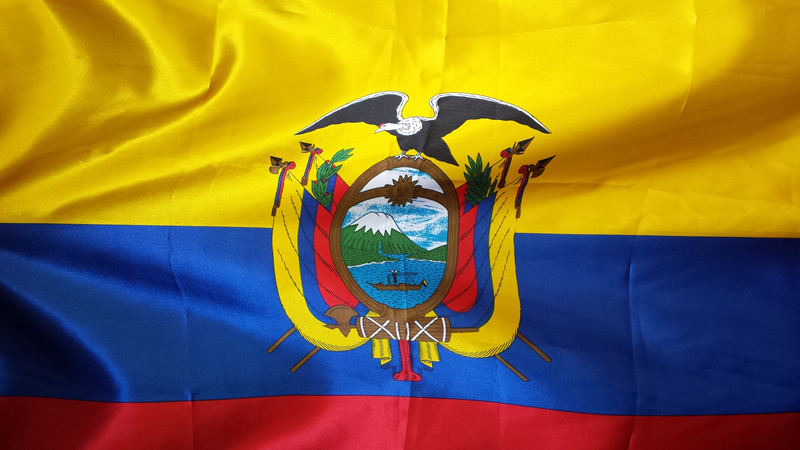 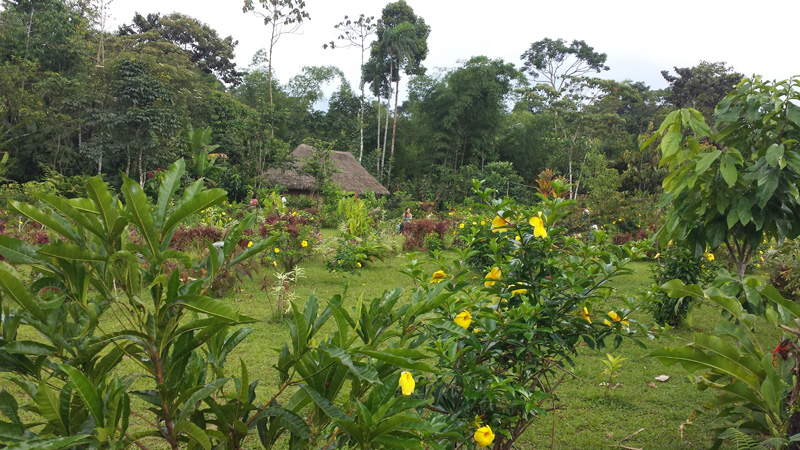 Town square in the jungle of Ecuador 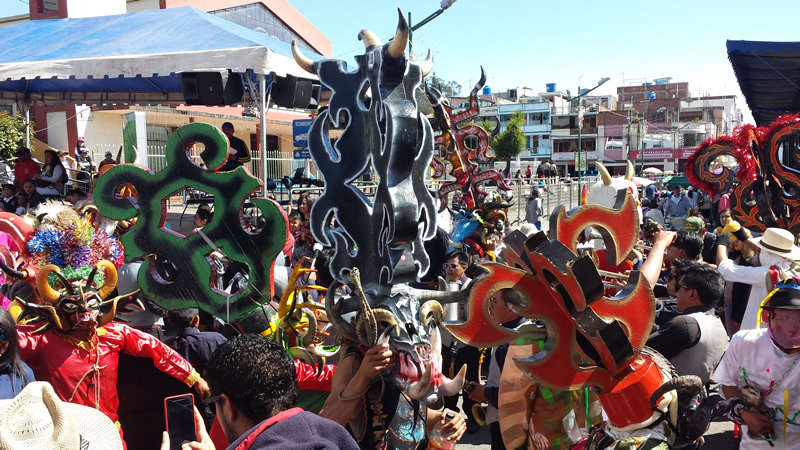 Diablada Pillareña 2018: One of our guides visits Ecuador