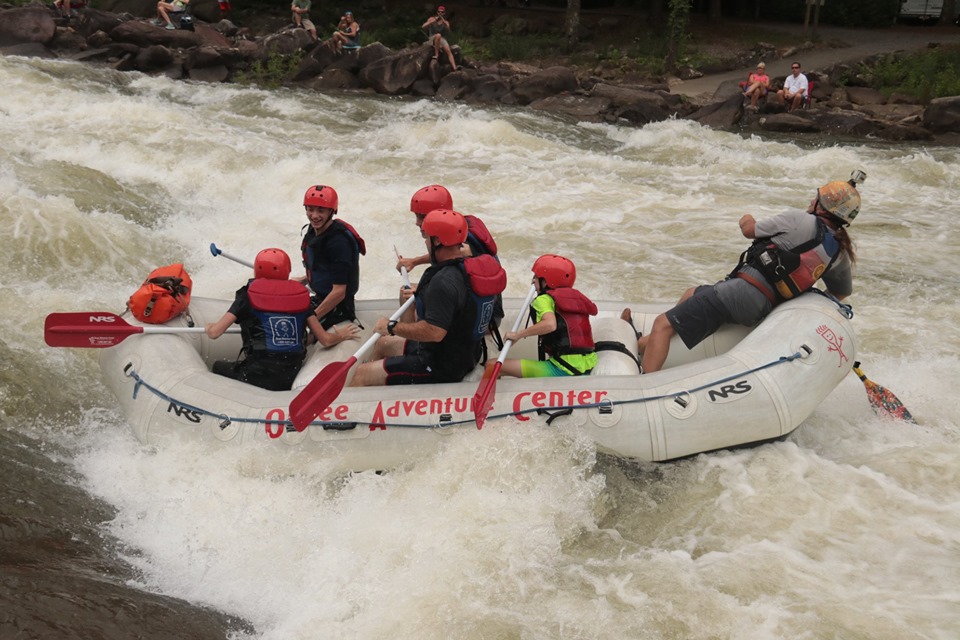 Paddleman and friends take their time playing down the river sharing joy and laughs as they go. Take a virtual Full River Rafting Trip down the Upper and Middle Ocoee River. Enjoy some exciting rapids, fun surfs, and human mystery moves at Cat’s Pajamas. If this looks like fun to you consider booking a trip by calling 888-723-8622 and make some wonderful memories with your family and friends.

This video begins and the Upper Ocoee River put-in just below the dam with a peel out into the current. Then you briefly experience Bush Gardens and the raft follows a tight path through brush and small trees. The first class IV rapid encountered on the Upper Ocoee is Mikey’s Ledge. Mikey’s features a large ledge following a technical approach where the excitement really begins.

Following Mikey’s we reach Blue Hole where the opening move is called Let’s Make a Deal. This video shows the preferred route through Door Number Two rather than Door Number Three aka Screaming Left. After entering Door Number Two the fun really starts in Blue hole. The raft will bounce and charge the waves holes and over rocks while carefully avoiding Black Betty towards the bottom right of the rapid. Black Betty is a rock that can causes rafts problems if struck in the course of run Blue Hole Rapid. After passing safely by Black Betty the raft rides like a fun roller coaster as it follows the wave train to a big pool above the 1996 Olympic Course.

The Olympic Course where the 1996 whitewater slalom events were held during the 1996 Summer Olympics begins shortly after passing under a suspension bride. The first ledge encountered is call Best Ledge. The second ledge encountered in the Olympic Course is called Smiley Face and is named for the only piece of graffiti not removed for the Atlanta Games in 1996. The final ledge above Callaghans is named Slam Dunk and is a high drop than the previous two ledges.

The pace really picks up with Callaghans as the guide and crew work the raft into the meat of the Olympic Channel. Callaghans has a series of fun large waves and big holes as well as a few rocks that need to be avoided. After a fun and exciting bouncy wet ride we exit Callaghans near the center of the river on a wave train. Using the wave train the guide works to maximize momentum towards Godzilla and Humongous. These two large holes/hydraulics have a well known reputation. Crowds gather here like NASCAR fans waiting to see a show; some hang from the banks like vultures. After safely negotiating the big ledge holes the rafters catch an eddy to pack the raft while they watch a few other crews run Godzilla and Humongous.

After finishing the Upper Ocoee our OAC Full River Trips stop for a great hot lunch with a choice of hamburgers or grilled chicken breast sandwiches. Homemade desserts are another of our lake side lunch options. The sweet tea is a great authentic southern treat but we offer other choices as well. Be sure to try the potato salad and homemade barbecue sauce before enjoying you lunch at a nice picnic table. After lunch we paddle across the lake to run the Middle Ocoee. There is often playful splashing as we cross the lake.

The Middle Ocoee begins with a bang at Grumpy’s Ledge. The is a nasty hydraulic in the center of the ledge but you guide can easily avoid it with a class II move. Look how easy looks to to run Grumpy’s in this video. Following Grumpy’s out rafting trip enters North Shore named for the surf features enjoyed by many hard boaters in kayaks and canoes.

The first of the big two rapids of the Middle Ocoee is encountered at Broken Nose. Broken nose is made up of a series of ledges; the first ledge is somewhat broken with an S-wave swoosh. Exiting the first drop with some left angle is important to avoid being dashed or at least stuck on the rock right bank. The Broken Nose finishes with a double ledge at the bottom in a friendly pool. Rookie guides occasionally pin their rafts on Kimberley’s Rock just to the left of the double ledge. Second Helping is located below Broken Nose on river right.

This rapid begins with a big ledge called Dragon Slayer followed by a sizable pool. After the opening ledge and pool Slice and Dice’s main attraction is Washing Machine with a potential drop surf. This rapid offers up even more surf spots for kayakers. The braver kayakers will throw loops and enders in Washing Machine but they have to roll fast to avoid the next ledge.

Moon Chute Rapid begins with a move around the front or back of a rock that resembles an elephant. Then we encounter a fun surf wave/hole for hard boaters before a fun bouncy ride to a big pool. Following the big pool is Double Suck Rapid. Double Suck features a large sloping ledge but unlike most ledges the hole at the bottom is weak while the next hole twenty feet away is quite sticky. The second hole is a great surf and play spot for rafters. Some surfs here can become epic as well and wet and cooling for the guests.

Another great photo spot on the Middle Ocoee is Double Trouble. Double Trouble is named for two large standing waves in at the top of its wave train. While you splash through the big standing waves OAC’s photographers snap pictures of your crew. This rapid empties out into a large pool above Left Right Left.

Some Class III boogie water to cool you off before entering the Doldrums. Squeeze Play offers some fun splashes and gentle wave to entertain and cool the crew. Flipper is more playful than Squeeze Play. This rapid is capable of flipping a raft but that rarely happens to most guides and crews. The first ledge offers up a small challenge to willing crews or can be snuck to the right missing the big splash. The second ledge of Flipper is much more fun and easy provided a good line was found through the first ledge.

Sneaky Pete is the first real challenge after the Doldrums. A large tongue points the way. Guides can follow the water over Sneaky Pete or sneak to the left to avoid the first ledge. This video shows the so-called hero line. This guide thinks it is the easy yet fun line. After running Sneaky Pete some quick guiding and paddling is required to line up for the next ledge. Surprise Ledge is a meaty drop with hazards to the left and right. Unwary guides are know to pin here. On rare occasions a raft may even flip. For most it is just good clean fun.

This is arguably the best rapid of the Ocoee River. While Tablesaw is only rated as Class III+ this is my second favorite rapid in the Southeast; my favorite rapid is Rapid Transit a Class V rapid on the Green River Narrows. There is a lot of class IV and V rapids between them but the fun factor of Tablesaw is huge! The crew if this video earned a great ride at the top of the rapid and enjoyed a fun 360 spin. Note the raft finishes far from the hazard know as Prudential Rock at the bottom right of Tablesaw. Safety matters but fun is a close second priority.

Sling Shot also know as Accelerator offers up a fun place to spin on the river right eddy line. Kayakers love to play here too! After a short pool below Accelerator we enter Cat’s Pajamas for a splashy good time. Cat’s Pajamas is made up of a series of broken ledges. Potential splashes and even surfs abound here. There is also a nice eddy to catch to allow rafters to try their luck at human mystery moves and cool off swimming in the deep pool below Cat’s.

The grand finale of the Middle Ocoee is Hell Hole and Powerhouse. Two powerful rapids stacked up back to back at the end of the Ocoee River whitewater. Hell Hole has two standing waves with a nice hole between them. This is a favorite surf spot for kayakers and a great hit for rafters. Powerhouse Rapid is made up of two ledges and can really wet you down. For best results and the most fun and safety avoid the far left side of the river next to the powerhouse.

This is a great way to beat the dog days of summer. Stay cool in the river. If you cannot decide which section to run the Full River Trip is your best bet. The Upper has big demanding Class IV while the Middle has twenty-two named Class III and III+ rapids and the best surf on the river. If this looks like fun and you want to play your way down the river rather than be rushed then join Paddleman by calling 888-723-8622 and reserving your trip!

I look forward to seeing you in the river! 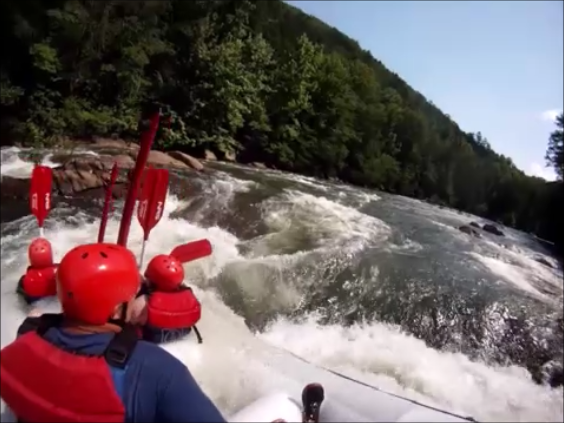 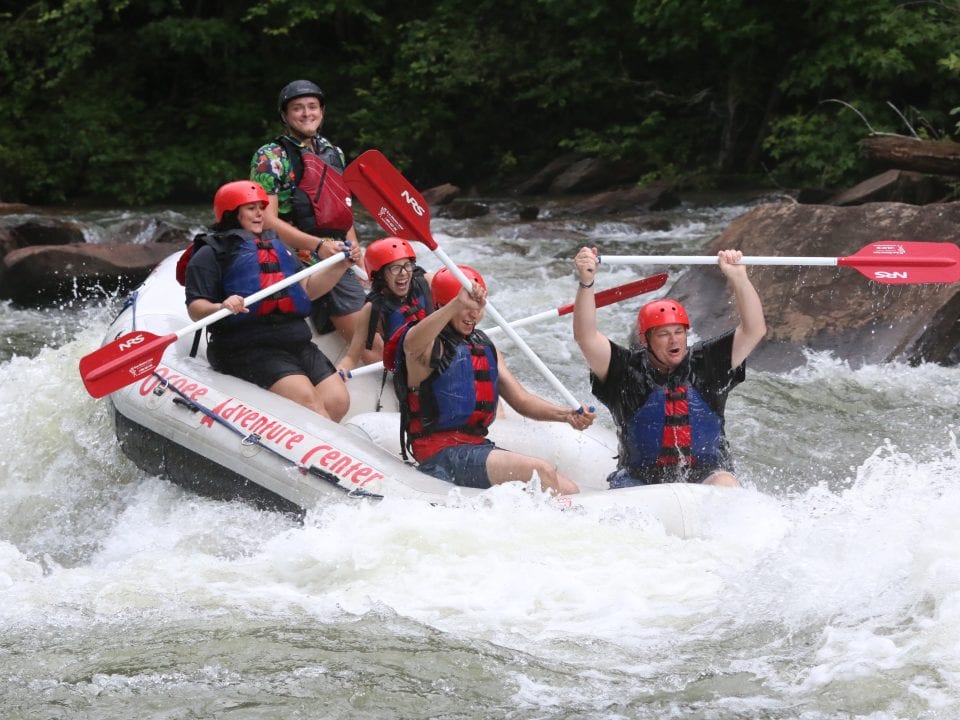